I started to write about KSP as a sandbox simulation and listing a series of guiding constraints that I personally follow to make the game a bit more interesting to me, but I got bored of writing it, so I assumed that others might also become even more bored trying to read it.  So I've decided to write about a practical topic instead--how to minimize debris fields around Kerbin also known as "avoiding creating a minefield of junk flying at bullet speeds in space!".  This is my first foray into writing about flight operations and rocket design techniques based on my own experiences.  If you have your own technique or lessons learned that you would like to share, please do!

So a bit of background about what is meant by debris fields.

Most players encounter debris the first time within their first few missions.  A basic starting rocket might consist of a command pod, a fuel tank, an engine, and a separator ring between the fuel tank and the command pod.  The rocket launches and ascends to a mid-level altitude.  Then the separator is activated and the command pod and the engine/tank assembly split apart. Just like that, the first bit of rocket debris has been created by your space program!  The command pod remains under player control and will typically deploy a parachute, splash down into water, and be happily recovered along with the green guy sitting bravely throughout this flight inside.  The fuel tank/engine assembly falls as uncontrolled debris back to Kerbin, and if we are lucky, it will crash harmlessly into the water or some barren patch of land.

This simple example illustrates how debris is generated during sub-orbital flights, which are those flights where "what goes up must come down".  However, rocket science defies conventional wisdom and not everything that goes up will come down.  When this happens, we have created what KSP calls persistent debris.

Debris comes from many sources.   Here are just a few examples:


Sub-orbital debris is generally not a problem.  It is jettisoned while the space craft is a sub-orbital trajectory, so no matter what the space craft decides to do at that point, the debris will almost always remain on the original sub-orbital trajectory.  The fate of sub-orbital debris is always the same.  Eventually, it will re-enter the atmosphere (if one exists) and make a sometimes spectacular crash on the planet or moon's surface.  This is an important mechanic when attempting to control how much debris is generated during mission operations, as we will soon see.

Orbital debris is a different problem than its sub-orbital cousins.  Orbital debris is one kind of persistent debris, which means it sticks around until removed.   Since it sticks around, it can get in the way of later missions.  If debris gets in the way, it could cause a collision, which, if forceful enough, could create a catastrophic failure for an otherwise perfectly healthy rocket on its way to places far away.   "Space is vast, and so the chances of collision are very small.  Why should we care?" you ask.  All of that is true.  The space around Kerbin is three dimensional and consists of millions and millions of cubic kilometers of open space.  However, most people tend to launch their rockets the same or in very similar ways.   I would even wager that most people tend to launch into equatorial orbits heading east with an altitude of anywhere between 75km and 125km.   That would seem pretty typical to me.   Since these parking orbits are normally used repeatedly, the debris ejected while in a parking orbit could create hazards for future flights using the same parking orbit.

It is worth noting here that even debris jettisoned during transfers from an orbit around a main body (e.g. Kerbin) to a target body (e.g. Mun) could still be very hazardous.  Debris that is in a transfer orbit trajectory will have one of three fates.  First, it might just crash into the target body.  Second, it might slingshot around the target and end up in an escape trajectory, which usually puts the debris in orbit around Kerbol, the central star.   Third, the debris could end up in a free return trajectory and fall back to the main body.  In a free return trajectory scenario, the debris might return to the main body and crash or it might assume a very highly elongated orbit with an apoapsis as high as the target body.  Debris in these highly elongated orbits are particularly dangerous because they tend to intersect low-altitude parking orbits at extremely high speeds due to the fact that a vehicle's orbital velocity is at maximum when crossing periapsis.  Luckily, the window of these intersections is very narrow.  Still, the danger exists.

So, for those of us that like to keep the traffic lanes of space clear of hazards, minimizing the creation of orbital debris is an important aspect of rocket design and flight operations.  So what are come things that can be done to keep the launch lanes clear of these supersonic surprises?


Here is an example of rocket trajectory illustrating how debris is controlled during flight.  This trajectory is basic and is possible early in KSP when playing the career mode. 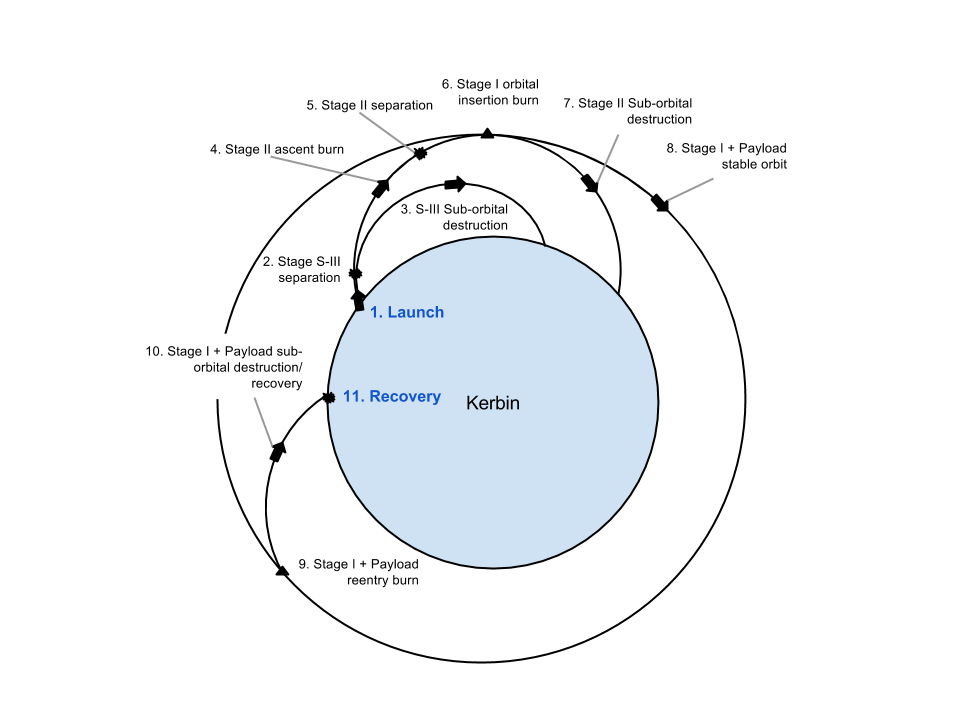 The key elements of this design include two booster stages (Stage S-III and S-II which are designed to coast the payload to a sub-orbital apoapsis of at least 75km, which is just outside the atmosphere.  These stages are separated before the suborbital insertion burn at Step 6 and retain their sub-orbital trajectories while Stage I and its payload are rocketed into a stable orbit.  Eventually Stages II and III will crash back to Kerbin, removing them from the simulation.  Stage I and the payload remain in stable orbit until the decision is made to return to Kerbin.   At Step 9, a retro-grade reentry burn is performed, which creates a new sub-orbital trajectory for Stage I and the payload.  At this point its not uncommon for Stage I and the payload to be separated.  Stage I is usually destroyed on reentry and the payload deploys parachutes to make a soft landing in somebody's backyard.  Throughout this entire mission, none of the parts from the launched rocket are left behind as persistent debris.  None of the lower stages were jettisoned while in stable orbit, and the Stage I module remained attached to the payload until the reentry burn was performed.

This is really simple example of how debris is minimized during rocket design and flight operations.  More complex missions, such as a trip to Duna, would require more sophisticated planning.  In some cases a decision might have to be made whether a little extra delta-v might be needed in the upper stages of a trans-planetary rocket to dispose of a jettisoned stage on the way to Duna, causing it to crash into the planet while the rest of the expedition happily burns into a stable orbit around the red planet.   When designing a rocket, a little extra delta-v can add up to a big change in the lower stages.  Whether or not the extra weight at launch is worth the benefit of minimizing debris, is entirely and completely up to you, the program director!

Until next time, Smooth Launches!
Posted by Unknown at 12:38 PM